Sierra Leone was a pioneer of western style education in Sub-Saharan Africa during the nineteenth century. Founded in 1827 'Fourah Bay College', was the first tertiary education institute in the region. The first boys school, Sierra Leone Grammar School, and the first girls school, Annie Walsh Memorial School, in the region founded in 1845 and 1849 respectively. The country was an important centre in training teachers, doctors and administrators for whole of West Africa in the first half of the nineteenth century. 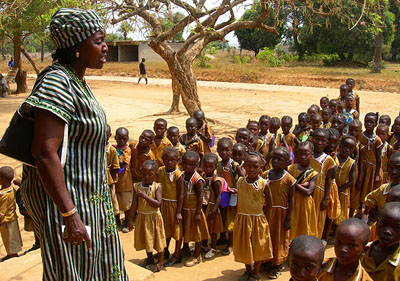 However, this early education was elitist in nature during development. Aimed at urban middle class and focused on the academically gifted who would go onto tertiary education before taking up positions as civil servants in the government. Leaving the majority of the population as not formally educated or only had a couple of years of primary education. When Sierra Leone declared independence in 1961, under 15% of children aged five to eleven and only five percent of 12- to 16-year-olds attended school.

After independence there was pressure to change the education system, but it wasn't until the 1990s that this grew to the level that led to changes in the system. Reforms were proposed so that the education system would serve the social economic needs of the country more closely, centering around increasing access to education, particularly primary education and placing more emphasis on technical and vocational education. In 1993 the government adopted a four stage approach to education and created the National Commission for Basic Education.

During the 1990s the Sierra Leone Civil War set these goals back destroying much of the country's infrastructure including schools; for example, 1,270 primary schools were destroyed.[2] This created a shortage in schools which was compounded by a shortage in teachers and so made the legal requirement of universal basic education for all children difficult to obtain. At the end of the war in 2001 67 percent of school-age children were out of school.

The Ebola crisis may have made school out of the question for now, but the Ministry of Education, Science and Technology, with support from UNICEF and other partners, is trying to make sure learning continues, through a national radio education programme launched this week. “The aim is to reach 1.7 million children that have no access to school with quality education opportunities,” says Uche Ezirim, Education Manager at UNICEF Sierra Leone. The programme includes core subjects such as English, mathematics, social studies, physical and health education, psychosocial and life skills, and hygiene and handwashing (which could include basic information on Ebola). Other courses are being developed by professional teachers and broadcast to pupils in their homes through a network of 41 radio stations across the country, coordinated by the Sierra Leone Association of Journalists and the Independent Radio Network. Stopgap

Sanda Charity runs off good will and donations. Please consider making your contributions.

No matter how small